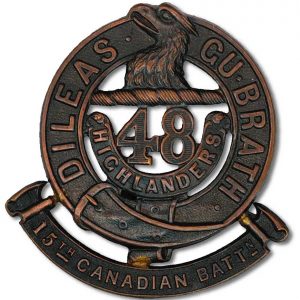 On April 22, 1915 the German 26th Reserve Corps launched the opening attack of the battle of 2nd Ypres  against the French 87th Territorial and 45th Algerian Divisions on the immediate left flank of the 1st Canadian Division. The assault was preceded by the first mass use of poison gas in modern warfare and the effect was devastating.  By midnight the Germans had penetrated deep into the French sector and were threatening the now exposed Canadian left flank.

The British/Canadian frontline had effectively become a pronounced salient. At the apex of that salient, the positions occupied by the 13th and 15th Battalions of the Canadian 3rd Infantry Brigade, were under threat of enfilade fire and encirclement from their rear. In an attempt to plug the open left flank, on the night of April 23rd hasty counterattacks were conducted against the advancing Germans at Kitchner’s Wood by the 10th and 16th Battalions. On the 23rd units were rushed to form a new hasty defence line all along the open flank from the Canadian frontline at the apex all the way back to the Yser Canal.

The area on the exposed left between St Julian and the front line positions of the 13th and 15th Battalions was under the most serious and immediate threat.  Therefore to plug that hole, the 13th Battalion line folded back on itself to form a right angle (a maneuver called ‘refusing the flank’) and elements of the 7th Battalion and the British 2/East Kent Battalion (The Buffs) were moved in on the 13th’s left.  The 15th Battalion was now literally at the very apex of the Canadian salient and being subjected  to artillery and small arms fire from the front, left flank and rear.

At approximately 4 AM on the morning of the 24th, the Germans launched a second gas attack which hit the apex of the line descending most heavily on No. 1 and part of No 3 Company on the right of the 15th’s line as well as part of the 8th Battalion’s line to their right. No. 1 Company was effectively annihilated by the combined effects of the gas, artillery and the follow-on assaulting German infantry which penetrated that portion of the 15th’s line. Of all the Canadian units engaged that day, the 15th Battalion was the only one without any artillery support as their supporting battery had mistakenly pulled back out of range.

In terms of what followed the collapse of No. 1 Company’s position, it is unfortunately reasonably simple to explain tactically. As the surviving elements of No. 3 Company in the centre and No. 4 Company on the right were effectively pinned in position by fire from the front and enfilade from the exposed left, the Germans rolled-up the line from right to left one platoon at time.  To be sure, there was desperate fighting and Major Marshall’s close support element at Death Mill delayed the enemy penetration into the rear of the front line positions somewhat but in the end as the apex was gradually lost, the survivors fell back as best they could to reserve positions hastily formed along Gravenstafel ridge by other Canadian units rushed into place.

No. 2 Company which had been left in Reserve at St Julian had become part of a combined force defending the town and the new left flank against the German advance that penetrated the French line on the 21st. With the front line at the apex collapsing and German pressure on the left continuing, the sub units of the St Julien `garrison` were overrun and surrendered on April 25th.

When the 15th Battalion moved into the forward line to relieve the 16th Battalion on April 20th, it had a field strength of approximately 900 all ranks. When the surviving elements of the battalion regrouped at Wieltje on April 25th, approximately 647 had become casualties – 233 dead ,of which 187 were MIA, 248 POWs and the remainder wounded with many of those eventually dying. There is a well-known period photograph referred to as ‘The Roll Call’ that shows survivors lined up in the battalion’s transport lines with an NCO calling the roll. Those who answered that roll call totalled 3 Officers and 150 Other Ranks. Battalion leadership, both Officers and Senior NCOs, was decimated – the battalion had in-effect been destroyed.  As The Official History of The Canadian Forces in The Great War 1914-1918 states: “No other Canadian battalion, and few British battalions, ever suffered so heavily in so short a time. “ The battalion would be quickly rebuilt with hundreds of reinforcements from CEF units in the UK. It would go on to take part in every major campaign and battle in which The Canadian Corps was involved for the duration of the war winning 20 Battle Honours in process. Ypres had been a successful defense but a costly ‘baptism of fire.’

The attached video ‘Roll Call’ of The Fallen from 2nd Ypres ‘speaks their names’ and in doing so insures that they have not disappeared from our memory and are not truly gone.