The battle of Amiens was the beginning of Canada’s 100 Days on the road to final victory in The Great War.

In March 1918 the German High Command commenced a series of large scale offensives along the Western Front. Although German forces achieved significant gains the Allies eventually contained their advance. The British and French prepared for a major counter-offensive at Amiens on 8 August 1918. The plan required moving the Canadian Corps from Artois, in conditions of the utmost secrecy, to take up a position between the Australian Corps and the French.

The 1st Canadian Division chose the 3rd Brigade to spearhead their assault. There would not be a preliminary bombardment but the infantry would be accompanied by four hundred light and heavy tanks. At 0420 hours on the 8 August 1918 the 15th Battalion, supporting the 13th Battalion, advanced into Hangard Wood and then Morgement Wood. One of their tasks was to deal with enemy positions that had been missed in a heavy fog which reduced visibility to under five metres.

One by one the villages fell to the Canadian infantry and the cavalry now took up the advance with thousands of horses thundering across the fields. On 9 August the ‘Highlanders’ continued their advance this time in support of the 2nd Canadian Brigade. Surprise was no-longer possible and the attack was met by a hail of bullets. A shell fell on the Battalion HQ, seriously injuring Lieutenant-Colonel Charles Bent, who handed his command to Captain John Maybin. 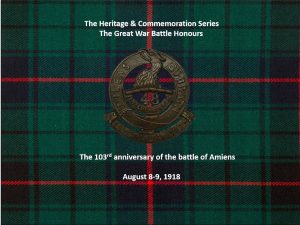 At Beaufort Château, machine gun fire brought the leading battalions to a halt, but Captain Maybin located five Whippet tanks and with their aid the château’s defenders were pushed aside. The Highlanders now rushed the village of Warvillers. As communications were lost with the 2nd Battalion in Rouvroy, the 15th Battalion sent out a reconnaissance party. Rouvroy seemed deserted until, suddenly, the patrol was confronted by a dozen Germans. The Battalion’s Scout Officer, Captain Gordon Winnifrith, reacted instantly drawing his revolver and single handed, made a screaming charge against the enemy. The vision of the charging ‘madman’ in a kilt put the Germans to flight.

That evening the 15th Battalion filled the gap between the 1st and 2nd Canadian Brigades and established their headquarters in the village château. The Battalion remained in this area until the 20 August 1918 when they were relieved by the French 112e Régiment d’Infanterie.

Between 8-9 August 1918, thirty-nine Highlanders of the 15th Battalion fell in combat and three more were killed during their occupation of positions near Warvillers and more died of wounds in the days thereafter up to August 29th. The Fallen lie in cemeteries along their line advance: Warvillers Churchyard Extension; Boucher New British Cemetery; Crouy British Cemetery; Demuin British Cemetery; Hangard Wood Cemetery; Hillside Cemetery; Manitoba Cemetery; Rosières Communal Cemetery Extension and Toronto Cemetery. The sole missing Highlander is commemorated on the Vimy memorial.

Click here to see our “This Week in History” page.

“NUMBER TWO ON RAPPEL!” A member of the 48th Highlanders rappels down the wall of Moss Park Armoury in Toronto as part of their recent Rappel Tower Operator Course. ...

Our soldiers in their natural habitat. The field exercise!

As an infantry soldier, the troops acquaint themselves with trainings that get more complex overtime and adapt to challenges they may face.

How do YOU adapt and overcome to your challenges?
•
Nos soldats dans leur habitat naturel. L'exercice de terrain !

No matter how cold or hot it may be, we continue to train in all terrains and weather!

Starting off with 36 candidates from different ranks, units and trades within the army, Sgt Haley completed the course with the total of 26 candidates remaining by the end.

On the Soldiers Appreciation Dinner, MCpl Bender was awarded a certificate for his completion of RTO (Rappel Tower Operator) course.

On the Soldiers Appreciation Dinner, the CO gave each of these individuals a CO's coin in recognition of their hard work for the regiment and their outstanding performances while representing the regiment outside.

Here at 48th, we have our own Santa Claus and his elves.

Christmas is here!
Merry Christmas to all those who celebrate and hope you have a wonderful holiday today!
•
En 48e, nous avons notre propre Père Noël et ses lutins.

Congratulations to Cpl Morrell and Sgt Pawlus on receiving their Canadian Forces' Decoration!

The Canadian Forces' Decoration is an award bestowed upon members of CAF who have completed at least 12 years of military service, with certain conditions.

This past Friday on December 10th of 2021, the regiment hosted Soldiers Appreciation Dinner. The regiment as a whole spent time together, appreciating each others' hard work for the regiment.

"Change the flag to red."

When we are on ranges, we take every precaution to ensure that soldiers conduct their training in safe manners.
•
"Changer le drapeau en rouge."