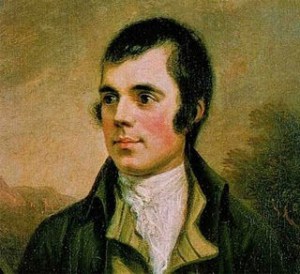 Robert Burns (25 January 1759 – 21 July 1796), also known familiarly as Rabbie Burns, the National Bard, Bard of Ayrshire and the Ploughman Poet and various other names and epithets,[nb 1] was a Scottish poet and lyricist. He is widely regarded as the national poet of Scotland and is celebrated worldwide. He is the best known of the poets who have written in the Scots language, although much of his writing is in English and a light Scots dialect, accessible to an audience beyond Scotland. He also wrote in standard English, and in these writings his political or civil commentary is often at its bluntest. Read More on Wikipedia

Address to a Haggis

Fair fa’ your honest, sonsie face,
Great chieftain o the puddin’-race!
Aboon them a’ ye tak your place,
Painch, tripe, or thairm:
Weel are ye wordy o’ a grace
As lang’s my arm.

The groaning trencher there ye fill,
Your hurdies like a distant hill,
Your pin wad help to mend a mill
In time o need,
While thro your pores the dews distil
Like amber bead.

His knife see rustic Labour dight,
An cut you up wi ready slight,
Trenching your gushing entrails bright,
Like onie ditch;
And then, O what a glorious sight,
Warm-reekin, rich!

Then, horn for horn, they stretch an strive:
Deil tak the hindmost, on they drive,
Till a’ their weel-swall’d kytes belyve
Are bent like drums;
The auld Guidman, maist like to rive,
‘Bethankit’ hums.

Is there that owre his French ragout,
Or olio that wad staw a sow,
Or fricassee wad mak her spew
Wi perfect scunner,
Looks down wi sneering, scornfu view
On sic a dinner?

Poor devil! see him owre his trash,
As feckless as a wither’d rash,
His spindle shank a guid whip-lash,
His nieve a nit;
Thro bloody flood or field to dash,
O how unfit!

But mark the Rustic, haggis-fed,
The trembling earth resounds his tread,
Clap in his walie nieve a blade,
He’ll make it whissle;
An legs an arms, an heads will sned,
Like taps o thrissle.

Ye Pow’rs, wha mak mankind your care,
And dish them out their bill o fare,
Auld Scotland wants nae skinking ware
That jaups in luggies:
But, if ye wish her gratefu prayer,
Gie her a Haggis

After the completion of their RSCC, these individuals have been promoted to the rank of sergeant.

Newest members of the regiment!

These members are currently on their last day of Highschool DP1 COOP course. After today, they will be joining the regiment as qualified infantry soldiers.

June is here! And that means that the summer has arrived! What are your plans for the upcoming summer break?