Pipes and Drums – a brief history

From the Beginning of the 48th Highlanders in 1891 there have been pipers present. Pipers Charles Munro and George Murray were the first two company pipers. They played while Captain Henderson drilled the men at Bailey’s Hall. 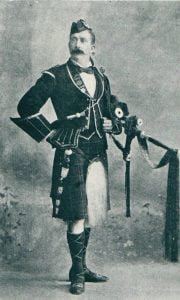 It has been said that an efficient pipe band is the pride of every commanding officer of a highland regiment. It was for this reason Pipe Major Robert Ireland, reputed to be the best piper on the continent, was recruited to serve as the first Pipe Major of the 48th Highlanders in 1891. During his tenure, the band was fully organized with a total strength of 19; 14 pipers and 5 drummers.

By 27 May 1892, when the first strength of the regiment was returned, the company pipers were: 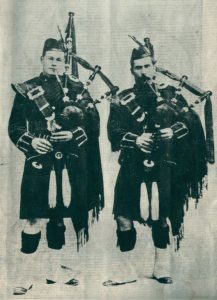 Pipe Major Ireland’s leadership helped the pipe band to become famous in only a few years. Robert Ireland started playing pipes with the 93rd Sutherland Highlanders, later moving to New York City until taking over as Pipe Major of the 48th Highlanders in Toronto. He won many solo piping contests held in North America at that time (The champion Cup of Canada and The Champion Bagpipe Trophy of North America, three times).

Subsequent to Pipe Major Ireland, the band has had a succession of highly qualified pipe majors. Mr. Norman MacSwayed replaced Pipe Major Ireland in 1895. Pipe Major MacSwayed was an accomplished Piobaireached player in Scotland. In 1900, Mr. Farquhar Beaton became Pipe Major. Pipe Major Beaton was a successful instructor and introduced the playing of parts in pipe bands in Canada. Upon hearing the Green Hills of Tyrol played in this manner, the Earl of Aberdeen, Governor General of Canada recommended that this type of playing be cultivated and to this day is still an integral part of the band’s performances.

The Pipes and Drums have always worked hard to continue the quality of performance under every Pipe Major. Pipe Major Archie Dewar lead the band to numerous awards in competition followed by Reay Mackay and Archie Dewar’s son Alexander “Sandy” Dewar.

Under the direction of Sandy Dewar, the Band won the North American Championship for Grade Two Bands in 1988 and 1993 as well as the Ontario Championship Supreme in 1994. In 1995, they were moved up to Grade One Competition.

Over the years the band has travelled extensively around the world. In the past they have performed at the 1934 Chicago World’s Fair, The Edinburgh Tattoo and the Wembley Military Tattoo. They performed throughout Holland to mark various anniversaries for VE Day, most recently in 2000. The band is called upon to play at many shows and festivals throughout the United States and Canada. Performances include the Nova Scotia Tattoo in 1987 and television shows such as the Ed Sulivan Show, and the Miss Canada Pageant. Several documentaries, such as For King and Empire, have used the bands recordings. The band has travelled to Estes Park, Colorado; Pleasanton California; the Citadel, Charleston SC; Fort Hood, Texas; Atlanta, Georgia; Glasgow, Kentucky, Fort Ticonderoga, Quebec City, Italy, and Poland.

Marching on Ice for the Home Opener of the Toronto Maple Leafs.

The band also performs at many Toronto area functions and supplies soloists for weddings, head tables, dinners, and funerals. The 48th has played at the Toronto Maple Leafs opening Hockey game since 1931 and became a fixture at Maple Gardens on Opening Night. In 1999, the Band lead the parade from Maple Leaf Gardens to the new home of the Toronto Maple Leafs, The Air Canada Centre, where they continue to play for the opening hockey game each season.

The Pipes and Drums have released seven recordings over the years. More recent recordings include: Amazing Grace: All Time Bagpipe Favourites in 1988, Abide with Me: Hymns of Faith in 1994, and Fields of Honour in 1998.

As well as competition and tattoos, band members who are also members of the Canadian Armed Forces (CAF) are required to satisfy musical trade tests set out by the CAF Pipes and drums trade as well as courses in basic combat knowledge and leadership throughout their military career. The Pipes and Drums play an important role in the CAF supplying music for parades, remembrance services, mess dinners, and special functions. Members of the band have also participated in assignments such as the Ceremonial Guard in Ottawa and instructors at the Music Div of the CAF School of Logistic, CFB Borden.

The Pipes and Drums currently  includes both military and volunteer civilian members. The band has excelled in both civilian and military duties, becoming world famous for their unique abilities.