The carrying of small banners on the bass drone of bagpipes is a long-standing tradition. The oldest known engraving of a piper in highland military costume dates from 1743 and shows a banner of, apparently, the Cross of St. George hanging from his pipes. It could be argued that this was not only a military invention but that it had been carried over from a practice observed by the pipers of clan chiefs and other dignitaries.

Such banners became valuable items – made of heavy silk damask and richly embroidered with the heraldic designs appropriate to the owner. Their shape varies from burgee-type with two pointed tails to banners with two rounded tails, but they are always forked and usually fringed with silver or gold.

As uniform developed in the army and as it became more and more elaborate, what could have been more natural than for officers to have their own individual banners carried by the pipers whom they dressed and employed out of their own pockets? (There was no official position for the pipers and therefore no pay or uniform for them). Quite apart from the appearance they created, it must be remembered that they began to do this in the days when wealth, family, position and influence were the qualities through which young men obtained commissions. If they were incidentally good leaders, so much the better. Most of them came from backgrounds where the possession of a coat of arms was natural and common. False modesty was not a characteristic of the period and the banners were an ideal method to display their arms and social status to their fellow officers.

Even when the devices permitted on Colours was regulated, these regulations did not apply to pipe banners, but it then became more correct to display the badge or crest of the Regiment on one side of the banner and the personal arms on the other. There seems to have come a point when it was considered to be a bit presumptuous for very junior officers to parade their status and in many regiments the use of pipe banners was, quite unofficially, restricted to more senior officers

Nowadays, although there is nothing to prevent any officer having a banner, it is more common for them to purchase one on being appointed to command a company and to have it carried by one of his company pipers. Fewer officers now come from army families and it is not unusual for them to matriculate arms and to have them on one side of their personal banner. Usually one side of the banner is in the facing colour of the Regiment and the other side either in a colour selected by the owner or one chosen by the regiment for the sake of uniformity.

Of course, there are banners presented to Regiments by cities or towns or eminent people with some special connection with the Regiment; the Colonel-in-Chief and the Colonel of a Regiment will almost certainly have banners which will normally be carried by the Pipe Major and Pipe Sergeant or some other designated member of the Pipes and Drums and so on. Unless actually presented to the Regiment, pipe banners remain the property of the officers who purchased them and may be withdrawn when they leave the army.

Each regiment has its own rules and customs about when, where and who carries the pipe banners. They are not consecrated

like Colours and have no major significance. They are simply attractive decorations of considerable heraldic interest.

In the 48th the Commanding Officer’s banner is carried by the second-in-command of the pipe band. The Pipe Majors banner contains representations of the Queen’s Colour on the one side and the Regimental Colour on the other. All other pipe banners contain the family crest of the officer who donated the banner on one side and the regimental crest on the other. The piper’s pipe ribbons and cords must never hang on the Regimental side of the banner. 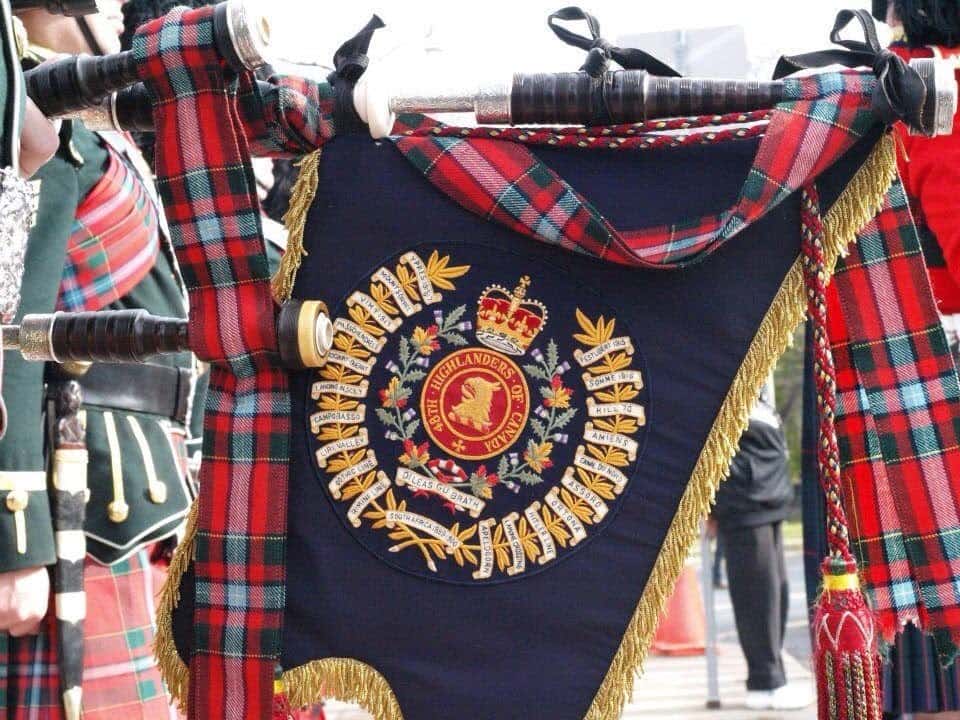