The Military Band of the 48th Highlanders of Canada has been a fixture of Toronto’s musical landscape since its formation in 1893. Throughout this long history, the Military Band has been a highlight of major annual public events in and around Toronto – from the Eaton’s Santa Claus Parade, to the Maple Leaf’s home opener (every year since 1931). Comprised mostly of civilian volunteers since 1965, the Military Band proudly wears the 48th uniform as it continues its dedicated support of the Regiment into its second century. 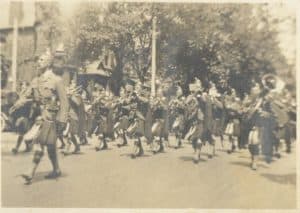 A military man since joining the Royal Navy at age 10, Captain Slatter did not neglect his military duties and ensured that the musicians under his command knew that they were first and foremost, soldiers. During World War I, he lent his talent to training military musicians, producing 63 army bands and over 1000 buglers as a District Director of Brass and Bugle Bands at Camp Borden (now CFB Borden near Barrie, On) while over 40 bandsmen from the 48th enlisted in the Canadian Expeditionary Force, One of them, W. Lloyd Algie, a pre-war euphonium player with the 48th, was awarded the Victoria Cross. Subsequent Directors have continued the musical traditions that have made the Military Band recognized near and far. The current Director of Music, Captain Paul van der Bank CD (ret’d) joined the Military Band in 1983 as a Trombonist. Under his leadership the Military Band has continued to evolve and grow, attracting young and older musicians alike. 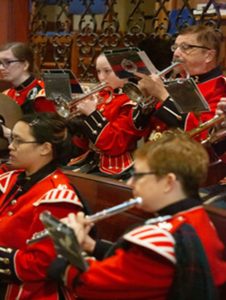 From its inception, the Military Band in its distinctive scarlet full highland dress and feather bonnets has been one of the country’s most recognized and popular Military Bands. In the early days, featured performances included the Quebec Tercentenary in 1908, and many performances in major cities throughout Canada and the United States.

From shortly after its founding in 1905 until the end of Eaton’s sponsorship in the early 1980’s, the Military Band held pride of place in the Eaton’s Toronto Santa Claus Parade, leading the Jolly Old Elf Himself. And, since 1931, the Military Band, together with the Regiment’s Pipes and Drums, has taken the ice at each Toronto Maple Leaf’s home opener.

More recently, in 1981, the Military Band joined the 48th Pipes and Drums, the Toronto Scottish Pipes and Drums and the Band of the Royal Regiment of Canada as the first Commonwealth contingent to perform at the Wembley Military Tattoo in London, England. In 1985, 1995, and 2000, the Military Band, together with the Pipes and Drums led the 48th and other Canadian veterans in the “Liberation ’45: We Do Remember” ceremonies in and around Apeldoorn, the Netherlands – a significant theatre of 48th and Canadian Army operations in World War II. 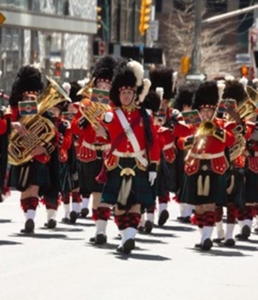 The 48th Military Band of today continues the traditions of its predecessors, performing at a variety of military and civilian functions each year. While today’s band is made up of civilian volunteers, it continues its unwavering support of the Regiment, wearing 48th full dress uniform and often parading combined with the regimental Pipes and Drums. The Military Band can be seen on the streets of Toronto each Remembrance Day, at the 48th Cenotaph in Queen’s Park, and at St Andrews Church, the Regiment’s spiritual home, honouring the Regiment’s history every spring. The band has performed in a variety of settings, both as a marching/parade band and as “sit down” concert band. Venues have included the CNE, Royal Winter Fair, Convention and Social gatherings, Tattoos and parades in and around the GTA and around the world are only a part of the story.

The Military Band rehearses year ‘round at Moss Park Armoury, 130 Queen St E.  Tuesday evenings at 8pm. We are currently inviting all interested musicians with experience to contact us about attending a rehearsal. To find out more, please contact the Director of Music, Capt. Paul van der Bank CD (Ret’d) by email: 48thhghrsmilband@gmail.com

MAY 2022: 107th Anniversary of the battle of Festubert

Happy Birthday to our Colonel-in-Chief

During the act of Remembrance parade on 24 April 2022, these members have been promoted to the rank of Corporal after serving for at least 2 years in the CAF.

Congratulations to MCpl Thompson and Cui on their promotions.

After their completion of Rifle Section Commander Course (RSCC), they met the requirements to get promoted to the rank of Sergeant.