Menu
Message from the Padre 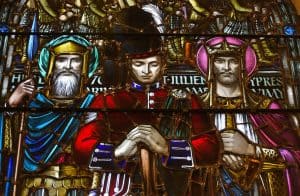 As I write this, many of us are marking Easter week and I can’t help but note that it was on an Easter Monday, April 9, 1917, that the Regiment participated in the famous battle of Vimy Ridge.

The weather on that fateful day 104 years ago was cold and sleety, quite different from the balmy temperatures here in Ontario this weekend.

When I think about the 15th Battalion and the hardships they faced while deployed overseas in WWI as they faithfully did their duty to God, King and country, I sometimes imagine that they must have thought to themselves, “At least the folks at home don’t have to deal with the mud, and the trenches, and the lice and the endless roar of the guns and the death.”

As we enter the second year of the COVID pandemic, I reflect back on the experience of the troops who participated in OP LASER last summer and how different it was for those deployed in a domestic operation where the battle had come to us.

A year ago this week, members of 32 CBG and the 48th Highlanders were stepping up for OP LASER, part of the CAF’s domestic response to the pandemic which saw hundreds of soldiers mobilized and ready to respond to any number of requests for assistance.

In my role as CBG chaplain, I was working with a team at brigade HQ to anticipate and prepare resources for our members to support them as we faced the many unknowns around the effect the pandemic would have on employment, the health and well-being of family, education and so forth.

Later in the summer, I had the privilege of serving with the Territorial Battle Group (TBG) in support of several Long Term Care Facilities in the GTA. This was a very challenging mission and brought with it stresses and strains that our ancestors might not have been as familiar with.

These included the fact that while the troops were segregated in Toronto hotels and observing stringent PPE protocols, their families at home were potentially at a greater risk of contracting the disease. Economically there was no boom of war-time production, rather many people were off or out of work. The lockdown meant that there were no leaves or opportunities to see family, even though in some cases members could see their neighbourhoods from their hotel windows.

Since the end of that stage of the operation, we have all become more or less accustomed to the status quo, the ‘new normal’; but in my role as a chaplain I have spoken with many members whose greatest challenge has been a sense of loneliness as a result of the reduced opportunities to train and socialize with others. This enforced isolation is another thing Highlanders of the past might have a harder time understanding. It has never been more important to reach out and stay in touch with one another.

With Spring, however, and the steady rise in the number of the vaccinated, we can begin to hope for and look to better days again. I find hope in the Easter story of new life. I hope that you, too, have a source of spiritual strength that you can draw on to help you remain Dileas gu Brath, no matter what challenges come our way.