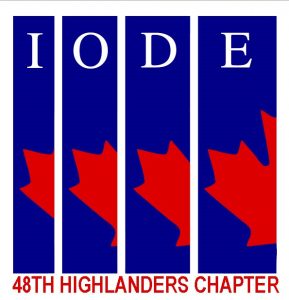 The IODE is a national woman’s charitable organization. Women of all ages, from all walks of life and educational backgrounds, meet in local chapters for fun, friendship and community volunteerism.  Members volunteer with and for people, focusing on Children, Education and Community Services.

48th Highlanders Chapter IODE provides bursaries and assistance to worthy Regimental projects. During the Regiments 125th Anniversary it funded the inscription of the Highlanders fiftieth battle honour – Afghanistan on the Regimental Memorial at Queen’s Park. It also supports selected schools in Northern Canada. The Chapter through its fund raising activities provides support to the affiliated cadet corps and for gifts and parcels to members of the Regiment serving on operations. The Chapter also supports community institutions such as Robertson House.

FOUNDATIONS OF A REGIMENTAL WOMEN’S ORGANIZATION

Through the efforts of Mrs. Mary  Davidson, wife of the first Commanding Officer on May 3rd 1907 the IODE 48th Highlanders Chapter came into being with it’s motto the same as the Regiment: “DILEAS GU BRATH” (faithful forever). It is the oldest Regimental Family organization and continues to support the Regiment today. 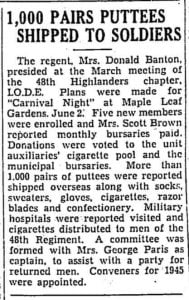 During the years 1911 to 1914 Captain John Slater and Pipe Major Fraser assisted the Chapter in raising funds for welfare work by conducting band concerts throughout the City of Toronto. During this time there was a combined band concert to aid the SS Titanic survivors at which the Chapter also assisted.

During World War I nearly $10,000 (1914 dollars) were raised in the war years for a number of patriotic funds including the Red Cross, the Patriotic fund, the Maple Leaf fund. On the unforgettable day of May 10 1919 Colonel Bent and the 15th Battalion (48th Highlanders) were enthusiastically welcomed home the Regent, Mrs. CW Darling, had the privilege of placing bronze laurel wreaths on the Colours that led them to victory. These bronze laurel wreaths now reside in the Regimental Museum at St. Andrew’s Church.

After the outbreak of World War II the Chapter raised money to support their activities. The women of the Regiment packed gift parcels for Highlanders serving overseas and as prisoners of war. Much was done to aid the families of the Regiment at home.

After World War II the Chapter has continued to actively supported the Regiment and its Cadet Corps. In 1955 when it was decided to have the Regiment go back into their traditional full dress scarlet uniforms it was the IODE ladies that assisted in the restoration of these magnificent uniforms. On May 4 2007 IODE 48th Highlanders Chapter celebrated its Centennial at a celebration held at Old Fort York.

IODE membership is many things to many people. It is this diversification that holds the interest of the members and attracts others to it. What other woman’s organization has so much to offer to so many and in such different age groups?

Message from the Honoraries regarding the Girvan medals:

Message from the HONORARY COLONEL