Menu
From the 48th Highlanders Museum 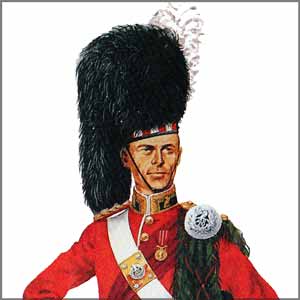 This Day in History

The appointment of Lieutenant Colonel John Irvine Davidson as the first Commanding Officer of the 48th Highlanders was confirmed on 25 March 1892. He had been gazetted (provisionally) on 20 November 1891 just weeks after the authorization of the regiment by the Government of Canada in October 1891. Lt.-Col. Davidson served as Commanding Officer from 1891 to 1898.

Davidson’s role with the 48th Highlanders began when asked by Alexander Fraser, journalist and Scottish author, and Captain Wilbur Henderson, a Scot who had served in the 34th Battalion in Toronto since 1880, to join with a select few of influential Scots at a meeting on 30 June 1891. Their goal was to gain government approval for an infantry regiment in Toronto that would reflect their heritage and traditions. The committee represented the many Scottish societies across Toronto including: the Gaelic Society of Toronto; the St. Andrew’s Society; the Caledonian Society, and the Sons of Scotland, as well as members of the Management Board of St. Andrew’s Church, a Presbyterian church founded in 1837.

On 3 July, they asked Captain John Irvine Davidson, a leading businessman and Captain in 10th Royal Grenadiers of Toronto, to be the first Commanding Officer.

Born in 1854 in Wartle, Aberdeenshire, Scotland, Davidson immigrated to Canada in his twenties, rose in business to become head of Davidson & Hay, Merchants and by the date of his appointment to command was vice president of the Canadian Bank of Commerce and president of the Board of Trade. He went on to become president, St. Paul’s Mining Company, and director of several other companies. In the military he began as a private in Scotland, serving a total of five years in the 7th Aberdeenshire Volunteers, the London Scottish and the Uxbridge Yeomanry. In Toronto, he was an officer for six years in the 10th Royal Grenadiers, rising to captain. He served on the Board of Managers of St. Andrew’s Church, including six years as Chairman. The 48th appointed him Honorary Lieutenant Colonel upon his retirement in 1898, a position he held until his death in 1910.

The Committee, having selected Davidson to be the first Commanding Officer then chose a tartan, the “Old Davidson”, in his honour and a regimental crest, a “falcon’s head erased”, which was part of the Davidson family crest.  Within the 48th cap badge is a couped Falcon head and the motto ‘Dileas gu Brath’ (Gaelic for ‘faithful for ever’). A Scottish belt, symbolizing the clan, surrounded the badge, which quickly became known as the Buckle Badge to members of the regiment. St. Andrew’s Church became the Regimental Church, a role that continues to this day

Following two deputations by the committee to the Government in Ottawa in July 1891, supported by a City Council resolution advanced by Toronto’s Mayor E.F. Clarke and Alderman Saunders, approval was gained. On 16 October 1891, the regiment was gazetted. General Orders 19. No.4 specified “eight companies of the Active Militia of the strength of 42 non-commissioned officers and men per company, to be formed into a battalion wearing the Highland Dress.”

This letter, now on display in the 48th Highlanders Museum from the deputy commander of Militia District No. 2 was the first order received, four days after the 48th Regiment (Highlanders) had been gazetted.

The Committee wasted no time and by the end of October the regiment was at authorized strength.  The majority of those who volunteered in October were first or second-generation Scots, an unsurprising fact since Scots made up 28 percent of Toronto at that time. Today, the Regiment continues to reflect the current makeup of Torontonians in race, culture and religion. All though declare themselves as proud Highlanders.