Defender of clans, fearsome soldier and proud warrior — the Highland soldier is an iconic military figure whose role and reputation have evolved over the centuries, both within Scotland and beyond.

Throughout history – from Scottish Clans of the past to Canadian Regiments of the present – Highland soldiers were feared by many due to their courage, resiliency, and skill. During the wars, soldiers that Highland units were comprised of, had a larger stature compared to the average commonwealth soldier, which played into the intimidation that would strike the enemy when coming face to face with a Highlander.

Canada’s enemies made frequent references to kilted Highlanders as ‘devils in skirts’ and ‘ladies from hell’.

READ MORE ABOUT OUR PAST 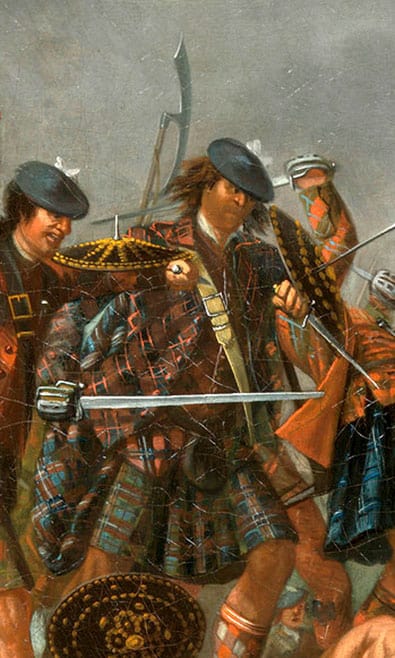 The active unit ensures that its roots as one of Canada’s premier Highland units are upheld proudly. By adopting a culture of physical/mental fitness and operational effectiveness we are able to continue the honour of being Highlanders.

The infantry’s job is “to close with and destroy the enemy, by day or by night, regardless of weather, season or terrain.” While this is no easy task, the Regiment is well equipped, and its soldiers train to the very highest standard, are mentally and physically robust, and are fiercely proud of their Regiment.

As infantry soldiers, Highlanders must think on their feet, react and interact, use their initiative, and play multiple roles – sometimes a police officer, most other times a soldier in the classic sense. Highlanders are also rebuilders and healers, deploying in the wake of hurricanes, floods, and earthquakes to bring medicine, food, and hope to those affected.

All training places a strong emphasis on live-fire tactical exercises at the section, platoon and company level, providing Highlanders with outstanding, realistic, and exciting training in field operations.

The Regiment fought with distinction in Canada’s major 20th-century wars. Since the 1990s, many Highlanders have served overseas on Canadian military operations, including Cyprus, Bosnia and other parts of the former Republic of Yugoslavia, Sudan, and Afghanistan. Some 48th may well be deployed overseas today.

“What has made the Regiment? What has seen it grow and succeed throughout the years? Two attributes are the foundation, volunteers and family…and the catalyst is leadership.

As a member of this famous family, your leadership skills will be constantly developed and you will share the bonds of family that make a great fighting unit.

Today, the following individuals have completed their ISCC, allowing them to be qualified to become Master Corporals once they return to their home unit.

Today, after more than 42 years of service, LCol Ron Alkema retires from the Canadian Armed Forces. LCol Alkema enlisted as a Private on 23 May 1980. He was promoted to Sergeant on 04 August 1986, was appointed Regimental Sergeant Major (RSM) on 15 November 2002. Following his tenure as RSM, LCol Alkema took his commission and was promoted to Captain on 15 July 2007.

LCol Alkema served in Germany, and has been deployed to Cyprus, Sierra Leone and Afghanistan.
All serving and former members of the 48th Highlanders of Canada thank LCol Alkema for his years of dedicated service, and wish him the best in the future.

CWO Smith spent time to greet the troop and talk to the instructors of the course about being a mentor and what it means to be an instructor.

Congratulations to Cpl Switzer on his completion of BMG!

As a qualified machinegunner, they are capable of mounting C6 GPMG onto the SF kit and provide effective fire within timely manner.

We hope you have a safe and an enjoyable Canada Day!

Pictures below are members of the regiment with our Canadian flag with them at all times.
📷: Cpl Chung & Capt Lau
•
Ô Canada !

After the completion of their RSCC, these individuals have been promoted to the rank of sergeant.

Newest members of the regiment!

These members are currently on their last day of Highschool DP1 COOP course. After today, they will be joining the regiment as qualified infantry soldiers.

June is here! And that means that the summer has arrived! What are your plans for the upcoming summer break?