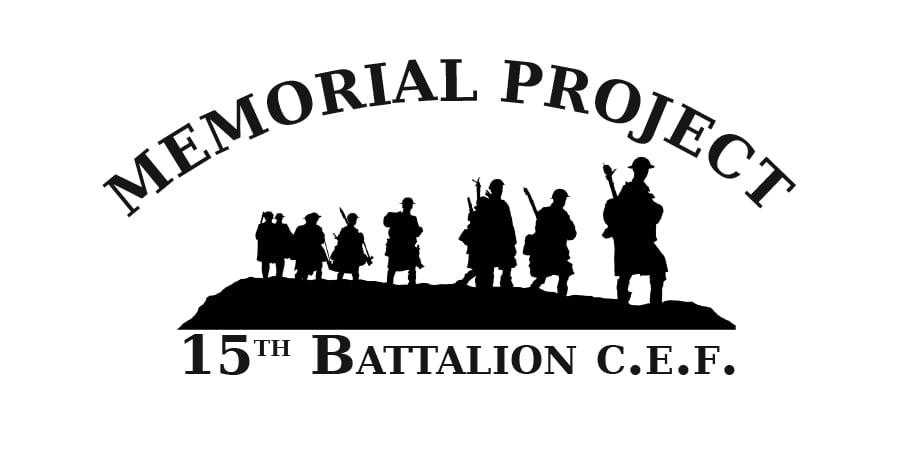 The 15th Battalion Memorial Project was initiated in 2007 with a simple objective: to commemorate all of the members of our Regiment who served, especially those who gave their lives, in the 15th Battalion of the Canadian Expeditionary Force (C.E.F.) during The Great War 1914-1918.

After the 100th anniversary of The First World War and the passing of that watershed event from memory to history, the Memorial Project is a vehicle to acknowledge the part that the 15th Battalion, and through it all Canadians, played in Canada’s contribution to the war effort on the battlefields of The Western Front. The Project has done this through a series of memorials erected in locations where the 15th Battalion won a number of the 21 Battle Honours it was awarded for actions during the Great War. Although focused on one C.E.F Battalion, the work of the Memorial Project with the local governments, organizations and communities both in France and Belgium has contributed significantly to the awareness of the accomplishments and sacrifice of all Canadians during The Great War. Although initially composed of members mainly from the Toronto area, by 1916 and through to the end of the war, the 15th Battalion was truly an ‘all-Canada’ unit with members from over 50 C.E.F Battalions and virtually every province and region of the country.

A standard bronze memorial plaque template has been designed which will be used at all memorial sites with only the narrative and map changing to reflect the historical particulars of each location. Following extensive historical research and thorough surveying of battlefield locations in Belgium and France, the first five memorial locations were identified. Raising funds; obtaining private and public authorization for land; acquiring the support and participation of local Municipal authorities and communities; and detailed review by historical authorities both in Canada and Europe necessitated the division of the first five memorial sites into three phases for execution over the period 2007-2012. Phase One was successfully completed on time and on budget in April 2010 with the unveiling and dedication of the first three memorials: two in Belgium at St Julien and Gravenstafel Ridge to commemorate the 1915 gas attack during the 24 April 1915 battle of 2nd Ypres; and, one in France at Hendecourt-les-Cagnicourt to commemorate the 01 September 1918 capture of ‘The Crow’s Nest during the battle of The Drocourt-Queant Line. The lessons learned during Phase One facilitated the execution of Phase Two which saw the unveiling and dedication of two more memorials: one in Belgium on 22 October 2011 at Observatory Ridge to commemorate the 03 June 1916 attack during the fighting for Mount Sorrel; and the second on 23 Oct 2011 at Festubert in France to commemorate the 20 May 1915 action at Canadian Orchard and The North Breastworks.. Phase Three identified sites for two new memorials – Hill 70 and Marquion (Canal du Nord) and both of these memorials were successfully erected and dedicated in September 2012.

The Project Team, all volunteers, consists of retired Officers who at times during their careers in The Canadian Army were former serving members of the 48th Highlanders of Canada which was the Regiment that raised the 15th Battalion during The First World War. The project has been fortunate to receive significant support and assistance from individuals, organizations and local governments and communities in both Belgium and France. In particular, sites for the memorials have been graciously donated by individual landowners and municipal governments. All funds for the project have been raised in Canada from private donations.

The Project Team has done extensive research on the 15th Battalion and has developed an extensive photographic and documentary database on the unit and the men who served in it during The Great War. This database has been shared with the archives of the 48th Highlanders Regimental museum in Toronto and is currently being uploaded to the Project’s website – www.15thbattalioncef.ca – where the material will be available to anyone seeking information or doing research on the battalion or any of its members. The Project Team has been successful in supplying information to many individuals seeking information on relatives who served in the 15th Battalion. Additionally, the Project Team is designing a display and collecting period artifacts for a permanent display on the 15th Battalion that will be housed in the Canadian section of the new extension to the Passchendaele Memorial Museum in Zonnebeke, Belgium. Lastly, the Project Team has been slowly working to upload thousands of photographs and documents to the 1,467 individual on-line Virtual War Memorial files maintained by Veteran’s Affairs Canada on all the men who were killed or died while with the 15th Battalion.

The Memorial Project works to insure that the story of the 15th Battalion CEF and the men who served in it is not forgotten and that their place in our collective remembrance remains strong and vibrant. In the words of the Battalion’s Regimental motto ‘Dileas Gu Brath’ they and we remain “Faithful Forever”.