Today is the 103rd anniversary of the battle for the Drocourt-Queant Line and more specifically for the 15th Battalion (48thHighlanders), the assault on The Crow’s Nest at Hendecourt-les-Cagnicourt.

The D-Q Line was part of the heavily defended Hindenburg Line and the assault on it by The Canadian Corps in late August-September 1918 was part of The Hundred Days campaign. Known by the German Army as the Wotung Stellung, the D-Q Line was one of the most powerful and well organized enemy defence systems. 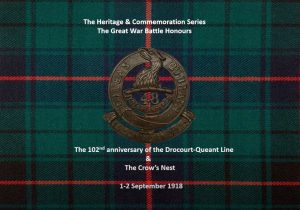 The approach to the D-Q Line and the need to secure good ‘jump-off’ positions to assault it was made difficult by several defended obstacles forward of the line itself – the most formidable of which was The Crow’s Nest, an strongpoint on a high bluff which overlooked a large section of the D-Q defences.

The 15th Battalion was assigned the task of securing The Crow’s Nest and on the morning of 1 September 1918, the unit assaulted and quickly captured it and the adjacent Chateau Wood. As at Hill 70, the battalion successfully defended the position against several German counterattacks thereby ‘opening the door’ for the main attack on the D-Q Line in which it also participated.

This video was produced last year and is part of the History and Commemoration Series of videos produced by the 15thBattalion CEF Memorial Project to commemorate the battalion’s role in a number of the key battles of The Great War in which, as part of the Canadian Corps, the 15th Battalion (48th Highlanders) was engaged. The programs also acknowledge the sacrifice of those men of the battalion who fell during those battles and to whose memory we remain Faithful Forever.

Click here to see our “This Week in History” page.

“NUMBER TWO ON RAPPEL!” A member of the 48th Highlanders rappels down the wall of Moss Park Armoury in Toronto as part of their recent Rappel Tower Operator Course. ...

Our soldiers in their natural habitat. The field exercise!

As an infantry soldier, the troops acquaint themselves with trainings that get more complex overtime and adapt to challenges they may face.

How do YOU adapt and overcome to your challenges?
•
Nos soldats dans leur habitat naturel. L'exercice de terrain !

No matter how cold or hot it may be, we continue to train in all terrains and weather!

Starting off with 36 candidates from different ranks, units and trades within the army, Sgt Haley completed the course with the total of 26 candidates remaining by the end.

On the Soldiers Appreciation Dinner, MCpl Bender was awarded a certificate for his completion of RTO (Rappel Tower Operator) course.

On the Soldiers Appreciation Dinner, the CO gave each of these individuals a CO's coin in recognition of their hard work for the regiment and their outstanding performances while representing the regiment outside.

Here at 48th, we have our own Santa Claus and his elves.

Christmas is here!
Merry Christmas to all those who celebrate and hope you have a wonderful holiday today!
•
En 48e, nous avons notre propre Père Noël et ses lutins.

Congratulations to Cpl Morrell and Sgt Pawlus on receiving their Canadian Forces' Decoration!

The Canadian Forces' Decoration is an award bestowed upon members of CAF who have completed at least 12 years of military service, with certain conditions.

This past Friday on December 10th of 2021, the regiment hosted Soldiers Appreciation Dinner. The regiment as a whole spent time together, appreciating each others' hard work for the regiment.

"Change the flag to red."

When we are on ranges, we take every precaution to ensure that soldiers conduct their training in safe manners.
•
"Changer le drapeau en rouge."

Message from the Commanding Officer
Scroll to top